A warehouse manager at Teshie, Njoku Chisom, has been put before an Accra Circuit Court for allegedly sodomising a 14 year-old boy on numerous occasions resulting in him behaving like a girl.

The parents of the victim detected some changes in the boy’s mannerism and when they asked why he was acting that way he disclosed to them that the suspect had been having sex with him for months.

The suspect, 26, was put before an Accra Circuit Court presided over by Rita Agyemang-Budu and charged with defilement of a child under the age of sixteen.

He pleaded not guilty to the charge. However, the presiding judge remanded him into police custody and adjourned the case to May 20, 2015.

Detective Inspector Kofi Atimbire, the prosecuting officer who presented the facts stated that the complainant was Agnes Anadzi a resident of Teshie while the suspect also lived in the same area.

According to him, in November 2014 the victim went to the office of the suspect and asked for funds as part of efforts to support the Red Cross.

He said the suspect told the boy to visit him at his residence later since he did not have money on him. The victim later visited the suspect at his house and he allegedly placed the boy on his laps and inserted his penis into his anus.

According to the prosecutor, the 14-year old boy started behaving like a girl from then on and when questioned why he (victim) refused to tell his mother anything.

He said on April 22, 2015 the victim after a severe query from his mother revealed that the suspect had been having unnatural carnal knowledge of him.

A complaint was consequently lodged with the Domestic Violence Victim Support Unit and the suspect was arrested and arraigned after police had concluded investigations. 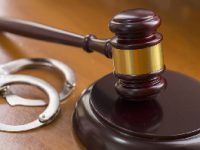