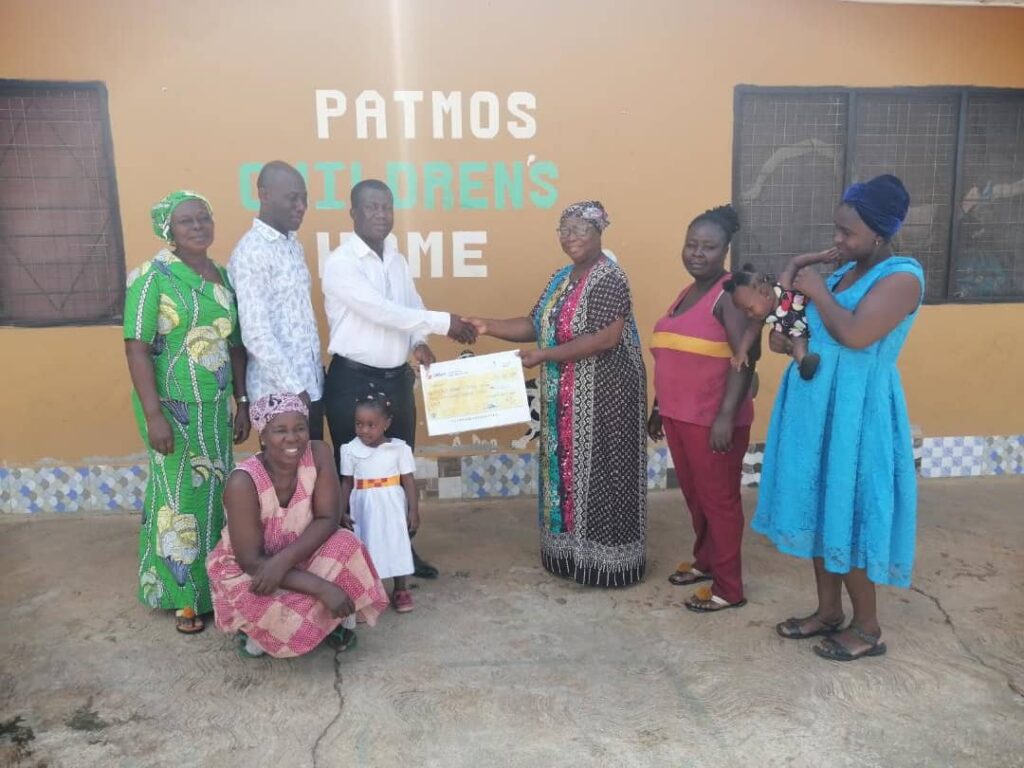 Members of the Livingspring Baptist Church (LBC), Atasemanso branch early Monday morning donated a cheque of GHC 5,000.00 to the Patmos Children’s Home, an orphanage at Tewobaabi, a community near Fomena in the Ashanti Region.

The gesture by the famous Baptist Church was to enable the home cater for some of its pressing needs.

Presenting the cheque on behalf of the church, Deacon Abraham Bamfi, Administrator at the Livingspring Baptist Church said as part of fulfilling its corporate social responsibility it decided to honor the kids at the Home with some funds.

The donation to the home, the Deacon noted formed part of the church’s 25th anniversary celebrations.

‘’We at the Livingspring Baptist Church believe that it was important to give to the needy and therefore as part of our silver Jubilee we decided to honor this home so as to bring smiles on the faces of the kids here’’, Deacon Bamfi stressed.

With a congregation size of about nine (9) people, he mentioned that the church was started by the late Deacon Osafo Darkwah but has grown to a membership of 522 currently.

Headed by a humble servant of God, Reverend Raymond Antwi-Fredua has led the church with good counsel and the fear of God.

Deacon Bamfi revealed the church had grown and had been on fire for the Lord because of prayer, adding that the wife of the leader, Minister Mrs Margaret Antwi-Fredua had been pivotal in the daily revival in the church.

The Church, the administrator disclosed recently purchased a motor bike to aid the activities of one of its affiliate organizations.

Accompanied on the trip by Mr Anthony Kumah and Minister Mrs Margaret Antwi-Fredua, the church leaders prayed for Patmos home as well as the children.

Receiving the cheque on behalf of the 34 children whose ages ranged between 2 and 17 years, Madam Akua Mmerah thanked the church for the gesture.

She noted the donation was timely since the home had many needs to deal with including the purchasing of food items and toiletries for the upkeep of the kids.

Currently, she noted the Home finds it difficult to deal with power outages since it had no stand-by generator to deal with such situations.

The Home she also noted was in dire need of a vehicle to convey kids to the hospital anytime there was an emergency.

‘’We are very grateful to the Livingspring Baptist Church for this gesture and I am not surprised because the idea of setting this place up was supported by the wife of the leader of Livingspring and we call on other institutions to follow suit by helping us secure a vehicle and a generator for the Home’’, Madam Mmerah pleaded.