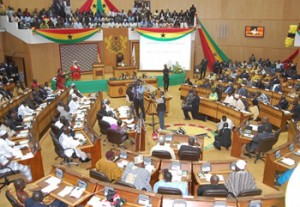 Professor Philip Ebow Bondzi-Simpson, the Rector of the Ghana Institute of Management and Public Administration, Monday, advocated a legislation to cap the number of representatives in the Legislature and a formula to ensure regional balance in the House, to reflect the population of an area.

Members of Parliament, he said, should also not be appointed as Ministers of State to afford them sufficient time to work on international agreements and the numerous bills presented to the House for passage and to execute their responsibilities as required by the State and their constituents.

Addressing the maiden Constitution Day Public Lecture, the legal luminary said the qualifications and quality of human resource presented by political parties as parliamentary candidates must be seriously scrutinised so that the individuals elected would be up to the task and not become a waste to the public purse.

The Lecture, under the topic: “Constitutionalism in Ghana’s Fourth Republic: Towards Functional Performance”, was attended by President Nana Addo Dankwa Akufo-Addo, as the special guest of honour, Prof Aaron Mike Oquaye, Speaker of Parliament, Ministers of State, Parliamentarians, chief executives of public institutions, representatives from civil society organisations and academia, and the public.

Prof. Bondzi-Simpson also said the mandate and membership of the Council of State must be reviewed to be more answerable to the people.

It should not remain as a mere advisory body to the President, which the public would not be privy to the admonitions offered, if the Council would not be abolished.

He, therefore, urged the Akufo-Addo-led Administration to ensure the implementation or review of the recommendations made by the Constitution Review Commission in order to bring finality to the work of the Commission.

The lecture was held to commemorate Ghana’s Constitution Day in recognition of the commencement of the Fourth Republican Constitutional dispensation on January 7, 1993.

It has also been set aside to acknowledge Ghana’s collective efforts at ensuring the tenets of democracy, rule of law and principles of constitutionalism are upheld.

Prof. Bondzi-Simpson emphasised the Constitution Day must be an occasion for sober reflection and public education to re-orient Ghanaians to improve on public service and constitutionalism.

The Day, he said, should not just be a national holiday and for public lectures, but be preceded with citizens’ forums where the district, municipal and metropolitan chief executives would render account of their stewardship to the people.

He suggested that the National Commission for Civic Education (NCCE) should facilitate the celebration by engaging teachers, students and pupils to conscientise them on the path of constitutionalism, while think tanks, representatives of the civil society organisations and the media be allowed to ask questions and critique the performance and activities of the local assemblies.

These, Prof. Bondzi-Simpson said, would provide the platforms for the people to come out with suggestions and innovative ideas that would improve upon the quality of public service delivery.

Prof. Bondzi-Simpson said deepening the relevance of the Day would afford the opportunity to do retrospection and plan the way forward towards enhancing political and socio-economic development.

Marking constitutionalism should not just be a jargon, but a reality that reflected the principles and values of modern democracy, he stated.

Constitutionalism should also improve on the rule of law, respect for human rights, grassroots participation in the decision-making processes and ensure probity and accountability.

He acknowledged the benefits of the 26 years of the Fourth Republican Constitutional dispensation, Prof. Bondzi-Simpson called for the review of some of the provisions in the 1992 Constitution.

Prof. Bondzi-Simpson acknowledged the contributions of some prominent Ghanaians, who advocated and fought tirelessly for Ghana’s constitutionalism, aiding the entrenchment of the current Fourth Republican Constitutional dispensation.

He also commended some personalities who yielded to the demand for constitutionalism and mentioned Justice D.F. Annan and Paul Victor Obeng (both of blessed memory) as well as former President Jerry John Rawlings and Captain Kojo Tsikata (RTD).

Prof. Bondzi-Simpson recounted the country’s trajectory from colonial rule through to the period Ghana achieved a republican status in 1960 and the various military interruptions and military regimes as well as the short-lived second and third republicans to the fourth constitutional republican dispensation.

A retired Supreme Court Judge, Justice Constance Owusu, the Chairperson of the Civil Service Council, who presided over the event, said the Constitution Day should serve as an advocacy platform to rekindle the supremacy of constitutionalism in Ghana.

She emphasised that the rule of law must be strengthened to sustain the democratic gains for socio-economic development.