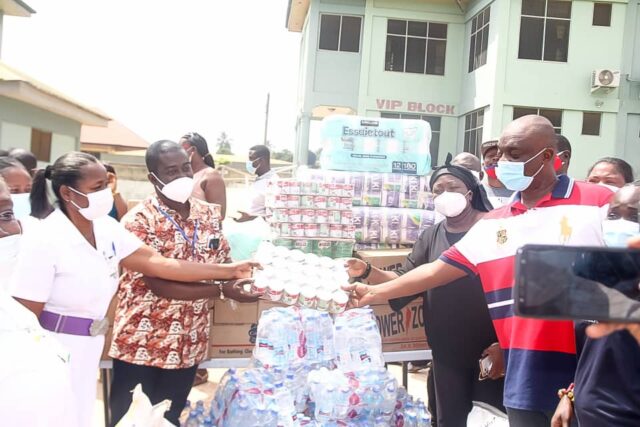 Some of the items were toiletries, detergents, food supplements and drinkables as well as hand sanitizers.

The YEA CEO also paid the bills of 48 persons who had been discharged but for their inability to pay for their bills was still occupying spaces at the premier health facility in Asokwa.

At a short ceremony at the precincts of the Hospital, Lawyer Koduah presented the items as well as cash of 20, 000.00 cedis to Dr Kwabena Boadu, Medical Director- Kumasi South Hospital to cater for the bills of the discharged persons at the maternity and general wards.

He also added 2, 000 t-shirts, 5 boxes of hand sanitizers, wrist-bands as well as two (2) brand new football jerseys to the party.

Making the donations at the house of the Member of Parliament (MP), Lawyer Koduah noted that the gesture was to serve two purposes which was to celebrate his birthday that fell last week and to show support to the NPP branch in Asokwa as it continues in the campaign to retain the President, Nana Addo Dankwa Akufo-Addo as well as the MP for Asokwa, Madam Patricia Appiagyei in office.

The YEA CEO thanked the Asokwa NPP branch for sustaining the retail and house to house campaigns despite the fear of COVID-19 and promised members that the party would not forget about their sacrifices when victory was won at the polls on December 7.

He noted that the support was timely and needful since the facility attends to high numbers from the Asokwa municipality as well as others from elsewhere.

On her part, Madam Patricia Appiagyei, MP for Asokwa commended the CEO for his thoughtfulness and generosity towards the party as well as the Kumasi South Hospital.

Such support, the MP who was flanked by the constituency Secretary, Papa Yaw Asare Bediako intimated was needful to urge members to do more for the party.