The former Director General of the Criminal Investigations Department (CID) of the Ghana Police Service, COP 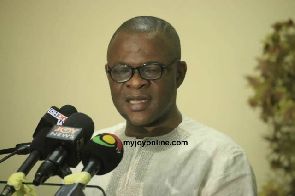 Bright Oduro has broken his silence over his forced leave prior to his retirement under the current administration.

He disclosed that his removal was premised on complete misinformation and peddling of falsehood by some functionaries in government wondering why this case would be different from others who retired recently but were allowed to use their leave to work.

“My removal was premised on complete misinformation and peddling of falsehood. All other officers who retired recently used their leave to work, why is Bright Oduro alone to proceed on leave and hand over?” he quizzed.

According to him, the National Security Minister Albert Kan Dapaah and maverick lawmaker for Assin Central constituency, Kennedy Agyepong masterminded his removal from office following unsubstantiated allegations leveled against him by the latter.

The former CID boss who has been forced to proceed on leave prior to retirement in January 3, 2018, said he has been unfairly treated by the police council chaired by Vice President, Dr Mahamudu Bawumia.

On Accra-based on Oman Fm, he said:” All other officers who retired recently used their leave to work, why is Bright Oduro alone to proceed on leave and hand over.”

“Whoever has taken that decision has not given me a hearing apart from in June thereabout, when I spoke to the deputy Minister of Interior about it, otherwise no one has spoken to me on it,” he said.

Touting his achievements in the service he stated that he succeeded in arresting notorious criminals who hitherto terrorized residents of the country indicating that he exits a proud man.

“I am so proud of what I have done in police service” he said and mentioned some of the landmark cases involving notorious and dangerous criminals such as Ataa Ayi, Kombian, Lone Ranger, Baby Nii among a host of others he was able to bring to book within his 29-years service and wondered why he would be accused of shielding criminals after all those successes”