The Inspector General of Police (IGP) Mohammed Alhasan has commended the Ashanti Regional Police Command for spearheading a new drive of transformational leadership in the region.

He made the remarks at the police command in the Ashanti regional capital Kumasi where he met Police Chiefs in the region to reinforce the police confidence reaffirmation campaign launched some weeks ago in the capital Accra.

Addressing the Regional Police Commander DCOP Kofi Boakye and his men, the IGP lauded their efforts at reducing violent crime which has for months now been a source of concern for the Ashanti Region.

The IGP was elated by the several facelift programs the command is currently embarking on at the Ashanti Regional Police Headquarters and admonished other regional commands to follow “the shining light”. 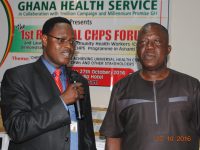