“Osei Kyei Mensah Bonsu says he is Messi here at Suame, we have also brought Neymar to replace him because he will soon get injured and leave the pitch”, Yammin declared to supporters of Brogya Genfi over the weekend during a rally for the aspirant.

Joseph Yammin told the over five hundred people gathered that he was sure Brogya Genfi will emerge victorious after the party’s 21st November Primaries but asked for a landslide in favor of Brogya Genfi.

Joseph Yammin held Brogya Genfi’s hands and emphasized his support for him stressing his experience in politics and his personal attributes as well as his knowledge of the Suame constituency. 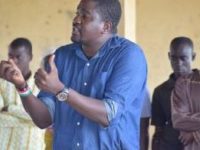