Hon. S.K. Boafo former Ashanti Regional Minister under former President Kufour and a member of Nana Addo’s 2016 campaign team exhibited some intergrity by telling the truth during a meeting with NPP party faithful in Kumasi a few days ago. Hear him:

“The support we used to enjoy in Ashanti Region has dwindled. The people would jubilate anytime seeing NPP and our candidate but today, they looked unconcerned even when Nana Addo passed. There is something really wrong and we have to up our game and fix what ever problem it is.”

I totally agree with the former Regional Minister that something is wrong, and I will explain. Nothing provokes the ire of Asantes than disrespecting their King.

Otumfuo Osei Tutu II is rated as one of the famous and powerful kings in Africa with an average net worth of between US$ 1.6 and US$2 billion. He is the occupant of the Golden Stool which according to history is the soul of the Asante Kingdom, and this brings him very close to the hearts of Asantes, and they will not trade him for anything.

The NPP has in recent times launched unwarranted scathing attacks on the Asante King. These include an allegation that he paid bribe to some Supreme Court judges on behalf of the NDC to rule in favour of President Mahama during the historic Electoral Petition Case.

Moreover, some opposition elements were fiendish and callous enough to spread false rumours that the Great Otumfuo had died. Besides, they reprimanded the great king for dancing with President Mahama after His Excellency commissioned an expansion work at the Kumasi Airport sometime this year. How can you castigate and ridicule the Asantehene and expect majority of votes from his kingdom? This would definitely spell the death knell for the largest opposition party in 2016.

But please wait a moment, there are more to the issue. Asantes and Akyems are hereditary enemies, and the suspicion that an Akyem president may not accord the Asantehene the needed recognition will continue to have a deleterious effect on the electoral fortunes of the NPP whose flagbearer is an Akyem. At this point, I think a historical remembrance of what brought about this enmity would be necessary.

In 1717, Osei Tutu I, a prominent Asante King was killed in a war against the Akyems. At the onset of the struggle, he had underestimated the Akyems because they were few in number, and so he went to battle without his usual “magical amulets,” and even left some of his body armor back in Kumasi, his capital. As he was crossing River Prah in a canoe, he was struck by bullets from Akyem snipers and sharpshooters, who were hiding in the dense treeline.

Asantehene Osei Tutu I, died minutes after being shot. His last words were, “Ankah me nim a” (if only I knew), an apparent reference to his having underestimated the Akyems. Till the present day, the occupant of the Golden Stool is forbidden to cross River Prah.

Do you see the coincidence? Akyems killed King Osei Tutu I, must an Akyem president disrespect King Osei Tutu II too? Chai, I heard some Asantes saying Torfiakwa, and they seem to mean business. I believe that was the reason why Nana Akufo-Addo did not become president even though he led in the first round in the 2008 presidential election. If you doubt me I’m going to prove scientifically.

The fear of Hon. S.K. Boafo is genuine because the woes of the NPP has taken a serious plunge for the worst: and predictably, their ignominious pratfall is certain; and the battle continues to be the “loss”. 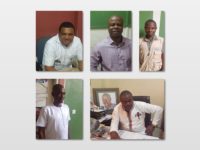