Former Minister for Women and Children’s’ Affairs, Hajia Alima Mahama has ruled out any possibility of her pairing the New Patriotic Party’s Presidential candidate for the 2016 elections.

Hajia Alima Mahama’s name came up strongly in the run up to the 2008 elections as one of the possible NPP members from the northern part of the country who were being considered to partner Nana Addo Dankwa Akufo Addo. But Nana Addo settled on Dr. Mahamudu Bawumia a former deputy governor of the Central bank to be his running mate for that election.

In 2012 Nana Addo once again chose Dr. Bawuamia as his vice Presidential candidate in line with the NPP’s tradition of pairing a southern candidate with a northerner.

With that position now vacant Hajia Alima who also served as a member of Parliament for the Nalerigu -Gambaga constituency said she is not considering running as a vice presidential candidate for the next elections.

She told Live FM, there are other roles she can play in the NPP other than being a Vice Presidential candidate. 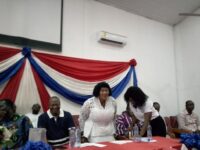