Government has assured striking public sector workers that their Tier-2 pension contributions are safe, even though it is adamant the funds will not be released to the workers’ private trusts until the state is satisfied with structures put in place to guarantee the value of investments which will be made from the funds.

Public sector workers last Wednesday embarked on an indefinite strike on issues relating to the management of Tier-2 pension funds. The unions want government and the National Pensions Regulatory Authority (NPRA) to transfer the funds, which are currently held in the vaults of the central bank, to their own privately-chosen trusts for management.

The workers say government’s retention of the funds contravenes the National Pensions Act, which allows them to choose their own fund managers.

But responding to the demands of the workers on Friday, Employment and Labour Minister Haruna Iddrisu said “government does not accept the operation of the 2nd Tier pension schemes registered by the four unions or associations in their current form.”

“We are saying that let’s take a cautious reexamination of this because we want to guarantee the future of those workers who may retire,” he told journalists in Accra.

According to him, government’s approach to this is informed by similar schemes in Chile, Spain, and South Africa, where pension funds are guaranteed to a certain extent by government.

“The concern of government is the associated future risk in the event of mismanagement of pension funds. It is a potential future risk that both government, unions and workers cannot anticipate today…we would not know if the monies will be managed well or not.”

Government, Mr. Iddrisu said, is the best and most reliable guarantor of all social security and pension benefits, adding: “We are ready to partner with public sector workers to ensure that structures and mechanisms put in place guarantee any foreseeable or unforeseeable future risks. If you cannot trust government, who can you trust?”

Workers due their pension from January 1, 2015 will be receiving the full lump-sum of their pension entitlement as stipulated in the law, he said.

In the meantime, the state is proceeding to court to seek a proper interpretation of certain provisions of the Pensions Act (Act 766) and some clarifications on the second-tier pension scheme, Haruna Iddrisu disclosed.

The Trades Union Congress, which is made up of 18 affiliated public and private sector unions, has backed the workers’ strike. 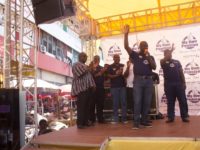