It is believed that many political parties have been destroyed by their supporters than by their opponents, and that is the case of the NPP. The party has disintegrated and as Kyeiwaa would put it, the Elephant has become “funeral”. It will be extremely difficult for the NPP to win power again in Ghana – the truth is that any political party which remains in opposition for more than two terms is likely to remain there for many decades if not forever. I am going to prove this in a moment with surgical precision.

Wale Okediram stated in his novel, “Tenants of the House” that money is the fertilizer of politics, and he is right. Political campaigns in Africa and for that matter Ghana are extremely expensive; therefore, losing elections for two consecutive times can be detrimental to a political party.

Raising funds for subsequent campaigns could be difficult since few intrepid financiers would want to support a serial loser. Perceptibly, there is no doubt that the NPP is in financial crisis, and the recent Prudential Bank revelation may be a tip of an iceberg. Besides, taking unrealistic filing fees from parliamentary aspirant towards the 2016 election, could be a clear justification of the point I am trying to raise.

It has been observed that one-party hegemony in many transitional democracies are partly due to the factionalism and internal squabble among the democratic actors which are organized as opposition political parties. The signs are not too good for the NPP. What is happening to the party is much deeper than what is being perceived. I will do a cutting-edge analysis to make my point.

The 2016 presidential election is going to be a pay-back time. The reason being that, but for a split in the UP tradition, Victor Owusu would have been elected president of Ghana in 1979; and some people in the Ashanti Region where Victor Owusu comes from seem not to have forgiven the Akyem Mafia who initiated the breakaway.

William Ofori Atta, popularly known as Paa Willie lost the PFP flagbearership race to Victor Owusu in a presidential primary election. As if to say that there is no permanent loyalty in politics but only permanent interest, the truculent members of the Akyem caucus in the PFP broke away and formed a new party called the UNC with Paa Willie as their flagbearer. Kikikikiki, I hear wopana was their General Secretary. Please don’t ask me who wopana is. I don’t want any acidic trouble.

So, it happened that in the 1979 presidential election, Dr. Hilla Liman of the PNP had 35.32%, and Victor Owusu had 29.86%. Interestingly, Paa Willie got 17.41%, meaning if he and his group did not breakaway, Victor Owusu’s chances would have been optimized. Since no one had more than 50%, the election went into a second round, and shockingly, the UNC painfully supported Dr. Hilla Liman who won by 62.0% with Victor Owusu trailing by 38.0%. Hehehehe, I will term this as cruelty on stilts! Kindly find below detailed results of the election:

Chai, do you get the filla? So, you see, this is the underlying cause of all the troubles in the NPP. Some Asantes have vowed to pay the Akyem Mafia back for what they did to them in 1979, and they mean to pursue this agenda with unflinching intent. Because of this, there have always been a struggle between the Asante and the Akyem groups with the ultimate aim to control the party, resulting in the political gangsterism we are witnessing today.

If you think I’m just doing propaganda, please check the composition of the factions and judge for yourself. In case the Asantes succeed in 2016 which is very likely, the music will play on: there will be counter sabotage anytime an Asante becomes an NPP flagbearer unless the party splits along those ethnic lines. I saw the election of Paul Afoko as the NPP national chairman, a huge step to solving this problem because he is a northerner, but now that he is being chased out of office by the Invincible Forces, there is going to be serious problem from whichever angle one decides to view it.

If he is removed, there could be a protracted legal tussle. If he stays, he is going to sleep with one eye opened. With this and other aforementioned issues, the Elephant won’t only be sent into the bush, but its body would be perpetually buried in a grave deep inside the bush. Awwwww, it is so sad, the Elephant is gone too soon. Kikikikiki, what a shock! 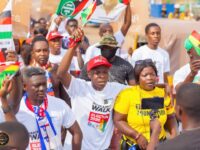 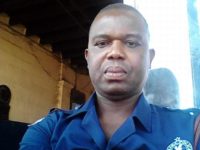 Policeman shoots and kills himself