GIJ to set up endowment fund to train journalists 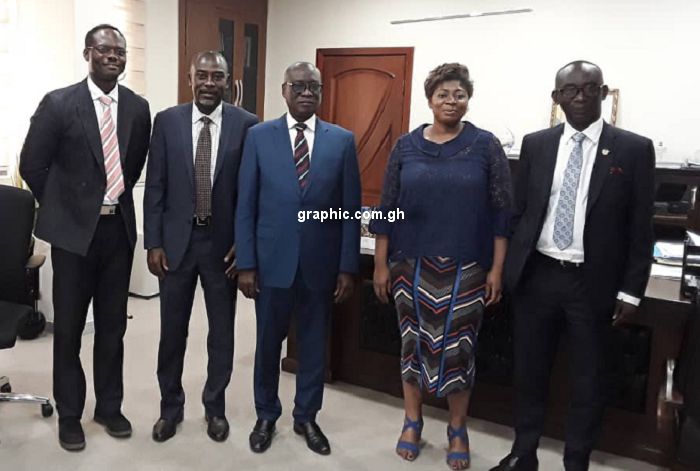 The Ghana Institute of Journalism (GIJ) is to set up an endowment fund to help train journalists and media practitioners to meet the needs of industry and society as a whole.

The fund, which will be used to acquire the needed logistics to facilitate the training of the student journalists and media practitioners, forms part of activities to mark the school’s 60th anniversary celebration.

The Head of Research and Acting Head of the Department of Communication of the institute, Dr Lawrencia Agyepong, disclosed this when the Rector of the school, Professor Kwamena Kwansah-Aidoo, Monday, February 4, this year, paid a courtesy call on the Acting Director-General of the Ghana Broadcasting Corporation (GBC), Mr. Augustus A. Yamson in Accra.

Professor Kwansah-Aidoo was there (GBC) on a familiarisation tour and also to inform the management of the station about the school’s upcoming 60th anniversary celebration and to solicit their support, particularly in the area of publicity.

Explaining the purpose of the endowment fund, Dr Agyapong, who is the Chairperson of the school’s 60th anniversary celebration committee, said there was the need to train media practitioners to meet the trends in modern media practice as well as the needs of the industry.

According to her, although the school has some of the finest media trainers in the country, the absence of modern media training facilities hamper the school’s effort in equipping its students with the needed skills and competencies.

Dr Agyapong indicated that the school wants to become an excellent media hub in the sub-region, training the caliber of journalists the country and for that matter Africa needed to develop.

Prof. Kwansah-Aidoo further explained that the school as part of its initiatives to train the sort of journalists industry wants, its sub-committee on the school’s council are putting measures in place to ensure quality in their products.

He noted that there was the need for industry to partner academia in the development of their programmes so as to ensure that the students who are graduated from the schools have the needed skills and competencies industries want.

“We have to find the middle ground because we are not only training journalists but critical thinkers,” Prof. Kwansah-Aidoo said.

He expressed optimism that GBC would come on board to support the school’s anniversary activities, describing it as probably “the largest end users of our products.”

He has therefore called on all relevant stakeholders, particularly direct beneficiaries of the products of the school to partner the school in designing the right course content to help produce the kind of products industries want.

For his part, the Acting Director-General of GBC, Mr Yamson said GBC as an institution has had a long standing relationship with GIJ, saying “the relationship is there and GBC as a sister public institution is willing to assist you.”

He, however, expressed concern about the quality of students who come out from the school in recent time, pointing out that many of them (GIJ products) lacked basic skills industry needed, hence urging the school to relook at its training.

Similarly, the Director of Legal Services of GBC, Mr. Kwame Waja, urged the leadership of the school to introduce specialisation courses in the school, stressing that products from the school will be better equipped when they are made to specialise in school than to be given general training.

Mr. Waja was of the view that many fresh students from the school struggle to cope with the demands of the profession due to lack of practical experience, resulting from lack of specialisation.

“The relationship between you (GIJ) and industry should be very, very critical,” he said.

The Rector and his team also paid a courtesy call on the Chief Executive of the Ghana National Petroleum Corporation, Dr K. K. Sarpong, where they discussed areas they can collaborate.

For his part, Dr Sarpong expressed worry about the quality of work some journalists put out particularly regarding the energy sector.

He has therefore suggested to the leadership of the school to design a course that will equip student journalists and would-be students of the school who want to report in the energy sector, the needed skills and competencies.

Dr Sarpong commended the Rector and his team for the visit and pledged the support of the institution towards the school’s 60th anniversary celebration.