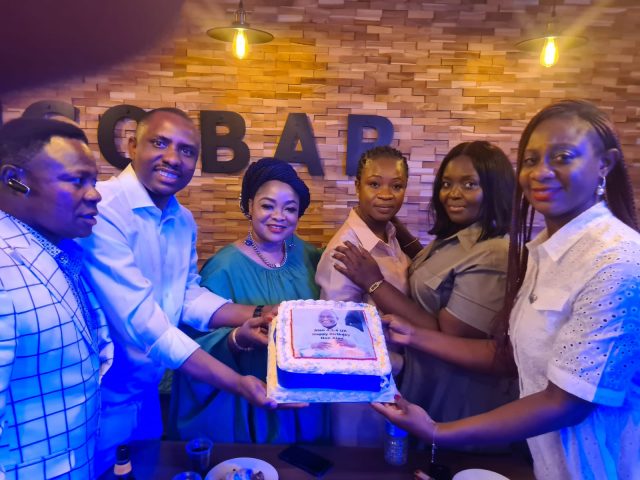 A group of Ghanaians based in the United Kingdom has held a party in London to celebrate the birthday of Ghana’s Trade and Industry Minister, Mr. Alan John Kyerematen.

The celebration which was held at Bongo bar in Tottenham (London) brought together several Ghanaians from various parts of the United Kingdom.

A cake beautifully prepared with Mr. Kyeremateng’s picture was cut for him, with everyone of them having a bite on behalf of the Trade Minister.

Leader of Alan Supporters UK, (organisers of the party) Mr. Thomas Oheneba Boakye speaking to this reporter  said “we are celebrating an added year of excellence.”

“We cannot wait to be in Ghana before being part of this great man’s celebration.”

“His excellence and impact goes beyond the shores of Ghana. We here have all been impacted by his commitment to Job creation and wealth making,” he noted.

Mr. Boakye stated that for his several years of impacting lives in Ghana, the least they could do to appreciate and honor him was to “join the millions of people all over the world to celebrate his birthday.”

He said Mr. Kyeremateng does not need their money hence honoring him in that manner, was the least they could do to show their gratitude for his selfless service to Mother Ghana.

“This is a man who, for so many years of his adult life, has been training youth to be on their own and establish themselves,” he said.

APPEAL:
He took the opportunity to plead with delegates of the New Patriotic Party to vote for Mr. Kyeremateng in the party’s upcoming flag bearer contest.

“Mr. Alan John Kyeremateng has been through intense training to be president of Ghana, what is most important now is for the delegates to vote massively for him when the time comes for flag bearer elections.”

“This is a man whose works in the various ministerial positions he occupied has produced great results that is seen by all. Today, about 70 percent of the NPP current government’s success story is from his ministry, let’s vote for him as our flag bearer and NDC will lose the 2024 elections in advance,” Mr. Boakye pleaded.