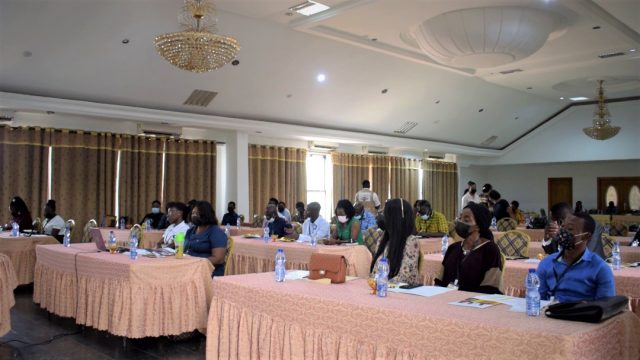 Ghanaian manufacturers and exporters stand the risk of missing out on the benefits of the Africa Continental Free Trade Agreement (AfCFTA) due to generally low production and export capacity that makes it difficult for them to meet the huge volumes required by importers.

Another cause for concern is a general lack of knowledge on matters relating to the export market. It has been established that many new exporters are unaware of the required licenses, legalities, funding sources for export, the market potential as well as standards expected of the export market.

The Ghana Export Promotion Authority (GEPA), an organization which facilitates and promotes non-traditional exports has set out to aggressively change the narrative through her Export School as well as other training workshops being held across the country.

During one of such capacity building workshops held in the Ashanti regional capital, Deputy CEO of GEPA in charge of Human Resources and Administration; Mr. Albert Kassim Diwura explained that in the wake of AfCFTA, exporters no longer have to set their sights on the European markets but rather consider amazing opportunities on the African continent.

The training programme held in partnership with Trade Facilitation Office (TFO) of Canada targets Women in Trade with a special focus on those in the Agriculture and Textiles industries.

Mr. Diwura explained that there are huge export potentials in the Agriculture and Textiles space for which capacity is required.

He further elaborated that the training sessions being held in the various regions are in response to surveys conducted that exposed the gaps in the export  sector and added that the training activities come under Pillar three of the National Export Development Strategy and will help build the skills of exporters and make them competitive on the global export market.

Towards the end of the 4-day training workshop held at the Miklin Hotel in Kumasi, Mr. Diwura stressed the need for small exporters to come together in order to pull the required volumes for the market.

He hinted that GEPA, taking a cue from the government’s flagship policies is gradually seeking to have a 1 district, one exportable product policy. He believes with a concerted effort from an entire district, significant volumes of exportable products can be amassed for export.

He praised the women for being very forceful and stressed that if the capacities of these women are built, they will do more and cause more significant change in the export space.

The participants praised GEPA for the training and stated that it will help build their knowledge base and also connect them to each other in order to help them raise their production capacities.

The landmark African Continental Free Trade Area (AfCFTA) agreement has the potential to create a continental free-trade zone with a combined Gross Domestic Product (GDP) of USD$3.4 trillion, according to the African Union (AU). This trade agreement, if implemented fully, would become the largest in the world.

The AfCFTA emphasizes the reduction of tariffs and non-tariff barriers, and the facilitation of free movement of people and labor, right of residence, right of establishment, and investment.

It is believed that Ghana’s prioritization of 17 commodities for the export market will enable the country produce and gain expertees in these areas.

AFCFTA to boost entrepreneurial drive in Africa-Minister for Communication affirms