Francis Owusu-Akyaw gives to Police, others at Juaben 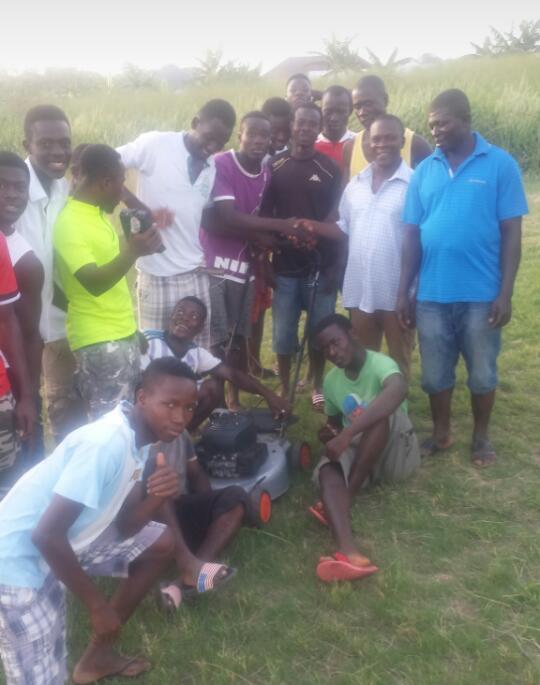 Mr Amoah Boateng, 1st Vice-Chairman for the Juaben NPP handing over the mower to the youth group

An aspiring NPP parliamentary candidate for Juaben, Francis Owusu-Akyaw has donated a flat-screen television to the Peminase Police in the famous municipality.

The minerals expert has also aided the Police in the construction of a Police Post at Bomfa, a structure that will help officers deal with the perennial crime in that area.

Mr Owusu-Akyaw touched by the plight of some teachers posted to Esaase has renovated the old quarters built for their upkeep.

At Adumasa, the aspirant donated a football trophy and GHC3, 000 to the youth engaged in a football competition.

Last week, Mr Amoah Boateng, aide to the aspirant donated a brand new mowing machine to the New Bomfa Youth to aid them weed the field they play their football matches on.

VISION:
Speaking to the Ghanaian Observer Newspaper, Mr Amoah Boateng, 1st Vice-Chairman of NPP said the aspirant is committed to securing a better future for the youth.

He noted that all projects commenced by Mr Owusu-Akyaw are to make the lives of the people in Juaben better.

The NPP, he noted needed a man like Owusu-Akyaw at this time to carry out vigorous development projects in the communities.

He rallied the youth at the towns in Juaben who are delegates to support the parliamentary bid of Mr Owusu-Akyaw.

‘’We will be better off as a people when we get Mr Owusu-Akyaw to lead us as our representative in Parliament’’, Mr Amoah Boateng.

SUPPORT:
Speaking to this reporter, 2nd Vice-Chairman of Juaben NPP, Kwaku Boateng commended Mr Owusu-Akyaw for the projects in Juaben.

He said the projects have since made the NPP look good in the eyes of the public, adding such projects would aid the second term bid of the party in the 2020 polls.

I Survived Ebola, But Villagers Shunned Me