Traders and shop owners in the Kumasi Central market woke up to another fire, which has razed down part of the market Friday.

According to Joy News’s Erastus Asare Donkor, the fire which started at dawn on Friday destroyed about 70 shops at the 31st December section of the market.

This is the third time fire has gutted that section of the market this year. Erastus said an eyewitness told him they heard explosions from some shops when the fire started. It is suspected that the fire was as a result of the LPG cylinders kept in the shops by some of the traders.

Although the Ghana National Fire Service arrived at the scene on time, they had a hard time bringing the fire under control.

Items destroyed in the fire include plastic materials, cosmetics and mobile phones.

A gentleman who owns a mobile phone shop in the market said he lost everything in his shop.

He blamed the Electricity Company of Ghana (ECG) for the severity of the blaze.

He indicated that the ECG was called to cut power supply to the market when the fire started because electric wires had tripped, but they failed to do that in time.

This he believes accounted for the intense nature of the fire. 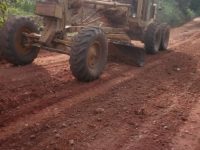 Buokrom roads to be completed in April 2020– MP