The fire situation in the Techiman municipality has seen a tremendous improvement following educational campaigns from the Fire Service and other Fire volunteer groups.

The municipality also recorded 4 bush fires compared to the 8 recorded in 2013.

Rural Fire Coordinator for the Techiman municipality, Solomon Nkansah in an interview with rawgist.com commended fire volunteers for the significant success chalked.

He compared the current weather to that of 1983, saying the winds are very dry and can encourage rapid spread of wild fires. He called on farmers and hunters to avoid fire activities all together during the dry season.

He encouraged fire volunteers to step up their game and ready themselves for further training to enhance their work. 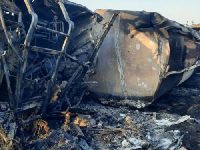