There was a serious altercation on Kumasi based Nhyira FM over the claim that head potters all over the country contributed GHC5,000 to the NPP.

The NPP held a fundraiser last Saturday towards the party’s campaign during which it was reported that the head potters known popularly as kayayes, donated GHC5,000.00 to the cause.

One Adisa also called Zongo Pioneer claimed to have mobilized the money from kayayes all over the country but another head potter, Atenee who claims to be the leader of the head potters dismissed the information as false and denied that kayayes never contributed to the NPP’s event.

She revealed that the kayayes as a group have monies they contribute and keep in a bank account but Adisa is not a signatory, “she is not even part of us”.

She revealed that Adisa was in fact not a head potter but rather a spare parts seller and couldn’t have mobilized funds from head potters as is being claimed.

“I am a head potter and did not hear anything about any mobilization of funds for the NPP, none of my friends did either”, she said and accused Adisa of peddling falsehood. She also threatened to go to court over the matter.

Adisa however insisted that head potters across the country paid amounts ranging from fifty Pesewas upwards. 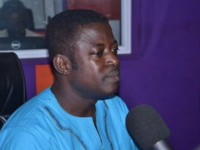