Ebusua Dwarfs have officially announced that they have parted ways with their coach, Ricardo Da Rocha.

The Brazilian trainer guided the ‘’abontoabontoa’’ boys to place 4th on the last season’s league but he will no more lead the team as coach for the upcoming season following the misunderstanding that ensued between him and his employers.

Ghanasportsonline.com can exclusively reveal that the ex- Cape Verde trainer exhibited gross insubordination and indisciplinary act towards his employers and all attempt to resolve this issue proved futile hence their decision to show the ex- Brazilian footballer the exit.

In an interview with Ghanasportsonline.com, the Public Relations Officer of the club, Mr. Paul Adjertey Dzane however, disclosed that the one season mandate they gave to the coach has come to an end and his outfit is not interested in renewing his stay with the club.

’’ We are no more interested in Da Rocha’s services and I can tell you that Dwarfs don’t have any working relationship with him anymore’’.

‘’Right now, our assistant coach Otibu is acting as our head coach so everything is on course’’. He exclusively told Ghanasportsonline.com.

Dwarfs is currently undertaking justify your inclusion to select the quality players for the upcoming season. 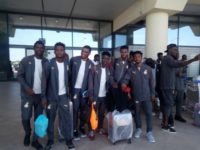