Residents at Singa and its surrounding villages in the Kumbungu district of the Northern region say they have not seen any development in their community in a long time.

They lament that they have queued to vote since 1992 but are yet to see any development in their community. They say they continue to live without electricity and refuse to vote until they get access to electricity.

They say they are ready to “kill anyone who brings a ballot box here on election day”.

They tell rawgist.com they have no business voting if they don’t see any development project before election day. They are also stretching their request to neighboring villages who seem to be in a similar situation.

“We want the whole Ghana to hear that we will not vote if we don’t have light here no one should think of coming here with a ballot box without his white mat because we’ll kill that person” .

Assembly man for the area; Sualiu Abubakar confirms the situation to rawgist.com and stated his support for the residents’ decision.

Attempts to get the District Chief Executive’s comment was not fruitful. 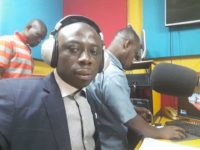