“Holiday.”  For most people the word is applied to one celebration in particular . . . Christmas!
The definition of the word “holiday” reveals a religious element of which many people are unaware.
Holiday: “a religious festival; [a] holy day.”  (Webster’s New Universal Unabridged Dictionary)

Christmas is a religious holiday.  Despite all the commercial trappings of the modern celebration, Christmas remains, at heart, a religious festival.  It is a time when a deity is remembered and honored.

Christians celebrate the birth of Jesus at Christmas time.  They exchange gifts in honor of the “greatest gift ever given.”  They say: “Jesus is the Reason for the Season!!” and speak of putting the Christ back into Christmas.

The problem is, Yahushua the Saviour was never “in” Christmas to begin with!  While Scripture does not supply the Saviour’s birth date, most scholars agree that He was born in the fall, not December 25!

To discover the god being honored at Christmas, it is necessary to trace its pagan origins.  Celebrations on December 25 began shortly after the flood with the birth of Tammuz as the reincarnation of Nimrod.  Today’s Christmas traditions come directly from ancient Babylon and pagan Rome.

The pagan Romans honored the god, Saturn, with a week-long festival in December called Saturnalia.

Saturn was the Roman god of time and of the harvest, so he was usually depicted holding a scythe.  He was the cruelest, most evil of all the pagan gods.  He demanded child sacrifice.

The Romans were not alone in worshipping this evil god.  Worship of Saturn was prevalent in the ancient world.  Even the Israelites worshipped Saturn when in rebellion against heaven.  The god Israel most frequently worshipped when in apostasy, was the god Saturn, (referred to in the Bible as Chiun, Molech, or Remphan.)  Even the Israelites offered their children in sacrifice to this vile, blood-thirsty god.

“Saturn had become the champion of African paganism [as well] . . . indeed as Baal-Hammon in Phoenician Carthage, he was the object of child sacrifice . . . . Although a fertility god, Saturn-Baal . . . was nonetheless ruthless in the sacrifices he exacted.”  (Quodvultdeus of Carthage, translation and commentaries, Thomas Macy Finn, pp. 14 & 115.)

Although the Romans quit offering human sacrifice early on, blood was still spilled by the gladiators during the Saturnalia celebrations in December.  Saturnalia was a religious celebration and all understood that the blood shed by gladiators was a sacrificial offering to Saturn.

“The gladiatorial shows were sacred [to Saturn].”  (Johann D. Fuss, Roman Antiquities, p. 359)
“The amphitheatre claims its gladiators for itself, when at the end of December they propitiate with their blood the sickle-bearing Son of Heaven [Saturn].”  (Ausonius, Eclog, i. p. 156)

“The gladiators fought on the Saturnalia, and . . . they did so for the purpose of appeasing and propitiating Saturn.”  (Justus Lipsius, tom. ii. Saturnalia Sermonum Libri Duo, Qui De Gladiatoribus, lib. i. cap. 5)

“The principle on which these [gladiatorial] shows were conducted was . . . [that] they were celebrated as propitiatory sacrifices . . . when such multitudes of men were ‘Butchered to make a Roman holiday.’  When it is remembered that Saturn himself was cut in pieces, it is easy to see how the idea would arise of offering a welcome sacrifice to him by setting men to cut one another in pieces on his birthday, by way of propitiating his favor.”  (Alexander Hislop, The Two Babylons, p. 153)

Despite the violence and bloodshed, Saturnalia was a time of feasting and merry making.  The various ancient celebrations honoring this most blood-thirsty god have come down to today as the much-beloved Christmas traditions celebrated the world over.

These traditions include:
•    the Twelve Days of Christmas
•    treats left out in the evening
•    Christmas trees decorated with lights (originally candles made from the fat of the burned bodies of child sacrifice victims)
•    Christmas trees hung with balls (anciently decapitated heads of sacrificial victims) 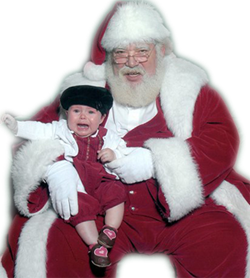 Even the imagery of Father Christmas, or Santa Claus, bears a striking resemblance to Saturn: an old man, with a long beard, surrounded by children.

Saturn, the evil, child-sacrifice demanding old man, appears in modern society in two more guises.  Every December, Saturn, the god of time, reemerges as “Old Father Time.”  Baby New Year is a symbol of the child-victim.

A chilling representation of Father Time with Baby New Year can be found in this illustration from the 19th century (below).  Father Time, (Saturn, as the god of time), is standing in front of a large clock, holding his scythe.  The old years are passing away as full-grown bodies wrapped in burial shrouds.  The New Year is coming in as a young child.  While the picture is quite dark, light from the fire is lighting the little boy while on either side are swirls of smoke.  The new years still to come are portrayed as children ready to be sacrificed.  Victims of child sacrifice were always heavily veiled so that their parents would not recognize when their child was burned.  All the grotesque elements of this hideous god are contained in this picture. 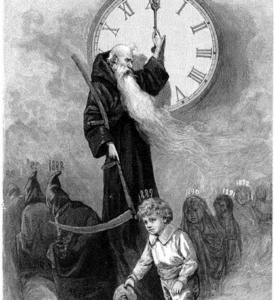 Saturn also emerges in modern society as the Grim Reaper, gathering in his bleak harvest of souls.  Very few in modern society have recognized that Father Christmas, the Grim Reaper and Old Father Time are none other than this most loathsome of all the gods.  However, an ancient would immediately recognize them all as being none other than Saturn.  The emblems which identified Saturn are the same which identify Old Father Time and the Grim Reaper: scythes and something to mark the passage of time.

There are many excuses given by sincere people today for clinging to pagan holidays honoring Saturn:
•    “Christmas is a wonderful time for spending with family.  We are so busy throughout the year this is really our only chance to get together.”
•    “Christmas is a great time to witness!  People are more open at this time of year so I use it as an opportunity to share.”
•    “Christmas is the only holiday that really focuses on Jesus!”
•    “I know that Jesus was not really born then.  I am not deceived.  Besides, I am not worshiping any pagan gods, so it is alright for me!”

The pagans were ignorant of Yahuwah, the Creator.  They worshiped demon gods because they did not know any 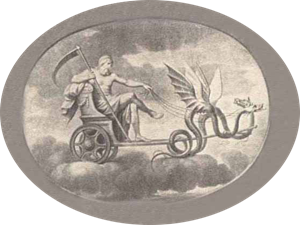 better.  The same cannot be said of Christians today.

Scripture teaches:
“The times of this ignorance . . . [Yahuwah] winked at; but now commandeth all men every where to repent.”  (Acts 17:30, KJV)

To know that Christmas is a pagan holiday, to know that the modern rituals are identical to the ancient pagan rites that honored Saturn, and yet to claim exemption from sin because one knows, is extremely inconsistent.

Christmas is truly a holiday: a religious festival.  By honoring the evil god, Saturn, DIShonor is given to Yahuwah, the Creator of Heaven and Earth.

The Saviour Himself stated a divine principle when He said:
“No man can serve two masters: for either he will hate the one, and love the other; or else he will hold to the one, and despise the other.  Ye cannot serve . . . [Yahuwah] and mammon.”  (Matthew 6:24)

Saturn, more than any other false god, had attributes most similar to Satan himself.  Christmas is his religious festival.  Participation in Christmas celebrations gives honor to this evil, satanic deity.

The words of a loving Father to backsliding Israel resound with force for Christians today:
“Surely as a wife treacherously departeth from her husband, so have ye dealt treacherously with Me, O house of Israel, saith . . . [Yahuwah.]  . . . for they have perverted their way, and they have forgotten . . . [Yahuwah their Covenant Keeper].  Return, ye backsliding children, and I will heal your backslidings.”  (Jeremiah 3:20-22)

Participation in pagan traditions dishonors the Creator.  Return to your loving Redeemer.
“For what accord has Christ with Belial [evil]?  Or what part has a believer with an unbeliever?  And what agreement has the temple of . . . [Yahuwah] with idols? . . . Come out from among them and be separate, says . . . [Yahuwah].  Do not touch what is unclean, and I will receive you.”  (2 Corinthians 6:15-17)
Come out from among them!  Do not touch what is unclean!!
Will YOU come out? 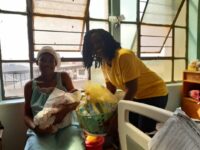 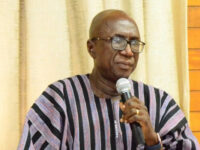 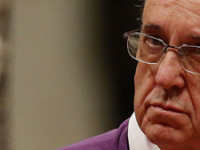