The National Biosafety Authority (NBA) has stepped up checks at the country’s entry points to stop the illegal entry of Genetically Modified Foods (GM Food). This follows concerns GM foods including rice and soya oil are being imported into the country without approval.

Some GM foods produced in America are difficult to identify because they are unlabelled. The Biosafety Act requires that all GM foods to be imported into the country or produced locally for commercial consumption are approved by the NBA first. But so far, it has not approved any GM food for consumption yet.

Board member of the authority Prof. Kwabena Mantey Bosompem tells Joy news the authority is working with other agencies to screen and detect such foods.

“Now with our regulatory framework developed, now the NBA, working together with Food and Drugs Authority and other regulatory agencies have been able to come up with a system of now checking. Anything that comes into the country, whether it has GM gene, will be detected and dealt with appropriately,” he told Joseph Opoku Gakpo in an interview.

He says foods detected to be genetically modified would be seized and destroyed or returned to the country it was imported from.

Prof. Bosompem says an exercise to detect GM crops that have already found their way into the country before the establishment of the regulatory system will also be undertaken.

There have been concerns by some Civil Society Groups that the consumption of GM foods could harm human health and damage body organs. But Prof. Bosompem who is also a Research Scientist at the Nogouchi Memorial Institute for Medical Research says the regulatory system is strong enough to help check and weed out risky GM foods.

“The system is such that if you develop a GM organism and it doesn’t qualify to enter into the system, it is killed on the way. So even the WHO communicates clearly and confidently that so far, globally, GM foods that have been tested and approved are as safe as conventionally produced foods, and could even be said to be safer. So GM foods don’t cause cancer. It’s not true,” he said.

Programme Officer at the African Biosafety Network of Expertise (ABNE) of the NEPAD Agency Godwin Lemgo is asking Civil Society Groups to refocus energies on putting pressure on government to build a good regulatory system for GM foods.

“I believe Civil Society is supposed to be a watchdog for government… But my problem is when they are trying to spread fear… So, the role I think they should be playing is; to make sure that government has the requisite regulatory structure to be able to regulate the technology and make sure that anything that comes out of it is safe for the public” he explained. 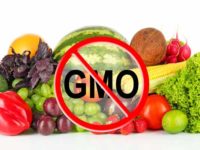