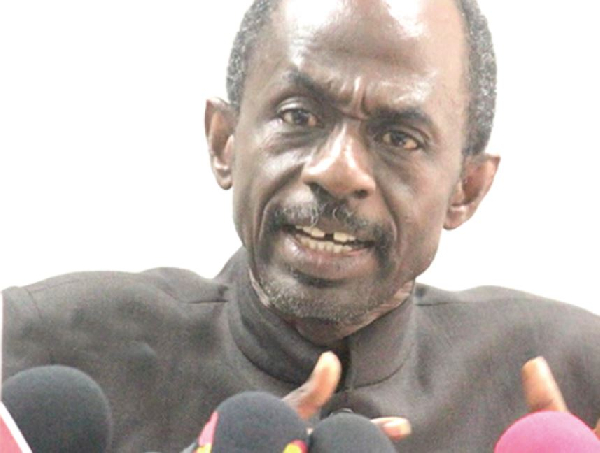 The name of Johnson Kwadwo Asiedu Nketia popularly known as General Mosquito who is currently the  General Secretary of the National Democratic Congress (NDC) party has come up  as one of the party’s big shots  who might  be considered for the vice presidential position of the party.

The rest are Mr. Julius Debrah, a former Minister and the immediate-past Chief of Staff and Dr. Kwesi Botchwey who was Chairman of the National Development Planning Commission under Mahama,  Dr. Zanetor Rawlings, MP and daughter of the Rawlingses and lately, 62-year-old, Mr. Leslie Mensah Tamakloe, an accomplished entrepreneur and Consultant.

The acquisition of Master’s Degree in Defense and International Affairs at the Kofi Annan Peacekeeping Training Centre last year August has given more credence to speculations that the 63-year-old former Member of Parliament for the Wenchi West constituency is readying himself to aspire for the second gentleman position of his party.

Mr. Nketia has openly declared he would accept the opportunity to partner Mahama in order to serve his country in that capacity.

The man of God who gave the admonition in what he termed “a friendly and honest talk” with the entire NDC following (Akamansonians) on social media emphasized that Asiedu Nketia is not the chosen one.

He is said to be a hindrance to NDC’s victory in 2016 having allegedly sold out the party and therefore must take the back stage because his conduct generally has affected the fortunes of the party.

Apostle Owusu Adjei  described the NDC  General Secretary  variously as a dictator , self centred,  power drunk  and  proud and that  Asiedu Nketia’s biggest mistake is his attempt to be bigger than the party when he represented  President Mahama  at the Election Petition  at the Supreme Court  in 2013.

Apostle Owusu Adjei said the stock in trade of the NDC chief scribe is divide-and-rule tactics in order to arrogate undue powers to himself as he seems to be taking over the chairmanship of the party.

He said having caused NDC’s defeat in 2016 election, Asiedu Nketia was bound to repeat same in 2020 and therefore it would not be prudent to consider him for the Veep slot because a coward cannot lead NDC to victory.

The man of God also referred to what he termed Asiedu Nketia’s loose talk and said the party’s fortunes began to dwindle the moment the General Secretary disrespected the founder of the NDC.

“At best he can become the chairman and not a Vice president”, Apostle Owusu Adjei indicated.

Apostle Owusu Adjei further said “A mosquito has proven to be a nuisance and threat to humanity and therefore not a man’s best friend”.

According to him a mosquito has never been man’s best friend for the fact that it infests man with the deadly malaria.

He said the “backing dog” as Asiedu Nketia once referred to founder Jerry John Rawlings was better than a buzzing mosquito who disturbs the peace of man. As “a man’s best friend” when a dog barks, it alerts one about an intruder.

Apostle Owusu Adjei further admonished the NDC flagbearer not to lose guard and suffer a witch to live because the same witchcraft is at play in the party quoting Exodus 22:18.

The man of God indicated that none of the named aspirants is chosen and said, however, that “Mr. Mensah Tamakloe is the anointed one”.

He said God is not happy with Nana Addo  Dankwa  Akufo-Addo and Dr. Bawumia  and therefore looking  for  one of the  “sons” (Tamakloe)  of Rawlings to partner Mahama to salvage the party and gear up for victory  in 2020,stressing that anything else becomes a fantasy.

He also cautioned that nobody should go against the divine selection of Mr. Tamakloe of face the consequences quoting Numbers 24: 9.