NDC Serial Callers in the Ashanti region have been mourning with President John Mahama since they got word of the demise of the President’s mother.

Chairman of the Ashanti NDC Media Monitors Association, Abdullahi Abdul Latif (Julius Agahowa) tells rawgist.com the News of the death of “our beloved mother was received with shock” adding that Hajia Abiba had been actively involved in efforts to amass votes for the President.

The death of Madam Abiba Nnaba, mother of President John Dramani Mahama, was all over news channels and social media.

The media monitors want the President to grief but remain strong in the face of the difficult situation. They explain that the country needs the President the most at this time and hence the need to prevent himself from being distracted even by grief.

“The Media Monitors together with the entire NDC machinery will remain strongly behind the President and ensure that we comfort him with another victory come November 7”. 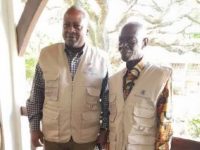