In a statement issued Monday from his US base, the former flag-bearer aspirant said: “Finally, it is breathtaking that 18 months to an election, with the governing party floundering, the main priority of the opposition Presidential candidate is the removal of his duly elected and loyal executives.”

“It bespeaks intolerance in a man who has the potential to be a great leader.

“This dumb obsessing will, if not abandoned, [will] lead to defeat and Nana must be told so bluntly,” Dr Arthur Kennedy said, adding: “Of course, the praise-singers around him who turned “ALL-DIE-BE-DIE” from a one-night mistake to a five-year albatross will not tell him so. They will worship him to defeat and then help him to find scapegoats for their dereliction of duty.”

Read the full statement issued by Dr Arthur Kennedy below:

CONFUSION OVER MANDATES IN THE NPP

Last week, I offered a multi-pronged approach to solving the crisis in the NPP.

My key suggestion was that there is an overwhelming need for all in the NPP to respect all mandates.

A mandate is defined as “the authority to carry out a policy or course of action, regarded as given by the electorate to a candidate or party that is victorious in an election”. Of course there are other mandates, conferred by appointment etc. I believe that a substantial part of the NPP’s current crisis is fuelled by a misunderstanding or misapplication of mandates.

Electoral systems that lead to the conferring of mandates vary from place to place or system to system. Indeed, even in the same system, the process for electing different offices may vary from office to office.

Thus in the US, President Clinton won two terms without ever winning 50% of the votes, even though he won a majority of electoral votes. Furthermore, George W. Bush, as had Rutherford Hayes before him in 1876, lost the popular vote while winning the Presidency. However, despite winning 49% of the votes, Mr. Bush won 100% of the Presidency. Indeed, in the recent UK elections, the Conservatives, who won barely a third of the votes, WON A MAJORITY of the seats in the House of Commons. Sometimes, there are multiple mandates from the same electorate, either concurrently or sequentially that appear to be in conflict. For instance, while electing a Republican President, Americans can vote for a Democratic Congress at the same time. Quite often, after election a President, voters will give the opposing party a majority in the next election. Indeed, in France, this has led to a President and Prime Minister from different parties, both with executive powers working together.

In the NPP, since 2012, the party has held elections for executives at all levels and for the flag-bearer. It appears that the party ignored the flag bearer’s wishes in electing the National Chair and General Secretary, while it refused to elect the preferred candidate of the two gentlemen in choosing the flag-bearer. In most other situations, this should not lead to problems. There are no monarchs in political parties. Unfortunately, in the NPP, there appears to be a misunderstanding of the party’s wishes—which is for all elected officers, from the polling station to the flag-bearer to work together in the interest of the party. Some claim that since the flag-bearer got a higher percentage of votes than others, his mandate should supersede those of the others. In my view, every mandate is sacrosanct. In 2007, when Nana Addo failed to secure 50%, and Alan stepped down for him to be the flag-bearer, he was not less a flag-bearer than when he won 94%. In the same way, even though he may have won less than 50% of the votes for Chair, Afoko won 100% of the Chairmanship. All mandates are important. If the NPP wanted the flag-bearer to choose National Executives, we would have voted only for flag-bearer and then permitted him to select his executives. Unfortunately, that is not what the constitution says.

It seems that the NPP has outstanding people in all of its leadership positions and these people should work together to secure victory, both in the Presidential and Parliamentary elections. Working together does not require the National Executives to surrender their mandates to the flag bearer. Indeed, it would be harmful to the party’s interest to do so. It is my considered opinion, shared by many in the party that Jake, and before him MacManu, who are outstanding leaders, and their teams erred in deferring too much to the interest of the flag-bearer. There are times when, in the interest of the party and even its flag-bearer, a National Executive team must buck the flag-bearer. As Richard Nixon once said perceptively, “There are times when one must protect the Presidency from the President.” All leaders must subsume everything into two goals—electing a President and a Parliamentary majority.

In 2008, despite the presence of an NDC majority in Parliament, Nana campaigned hard for the Presidency in the second round with the pledge that he could and would work with an NDC majority. He was right then and he is wrong now. Currently, his apparent reluctance to work with those who have been properly mandated by his party begs the question of whether, if elected, together with an NDC majority, he can work with them.

Finally, it is breathtaking that 18 months to an election, with the governing party floundering, the main priority of the opposition Presidential candidate is the removal of his duly elected and loyal executives. It bespeaks intolerance in a man who has the potential to be a great leader. This dumb obsessing will, if not abandoned, lead to defeat and Nana must be told so bluntly. Of course, the praise-singers around him who turned “ALL-DIE-BE-DIE” from a one-night mistake to a five-year albatross will not tell him so. They will worship him to defeat and then help him to find scapegoats for their dereliction of duty. 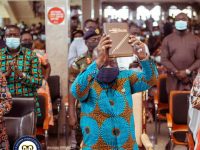