Friends, as I promised, today be today. Hmmm, matter dey. Filla dey paa; my mouth is heavy oo. Eish, I no dey fit talk sef. Big matter come. Hehehehe, your ears dey sweet you. Wait a moment I’m driving out of the Nsawam Prisons. Let me park and give you the filla.

I went to visit my friend, Atongo who has been sentenced for life imprisonment at the Nsawam Maximum Security Prisons for murder. Atongo, my frafra friend travelled to Kumasi from the north to eke out a living. He worked very hard as a farm labourer and started earning money waa, waa. He was engaged by Auntie Yaa Maggi to weed her farm one day; Atongo did a very good job to the admiration of Auntie Yaa, and she exclaimed out of excitement: “Aaah! Atongo, you’ve done well! You’ve killed me today. “You’ve killed me” is an expression in twi to show extreme appreciation.

Atongo with a mixed feeling of astonishment and anger responded: “Maame, why are you lying that I’ve killed you while on the contrary have done a good job?” “You seem to be a bad woman, you lied that I’ve killed you, I don’t know what you’ll tell people if I allow you to go home; I’ll finish you today and be satisfied that I have truly killed you,” he continued. Atongo carried out his threat.

He was hauled before a court for murder, and the following ensued:

Judge: Atongo, you’re charged for murdering Auntie Yaa Maggi, are you guilty or not guilty?

Atongo: Massa Prosecutor, you say I kill madam, ibi my right hand I use chicha or left hand?

Atongo: Huuu, na lie, mi di benkum ma chicha (I used my left hand to butcher): Massa Judge, I win the chase. Subsequently, he was sentenced and sent to prison; and that was my reason for going to Nsawam.

As much as Atongo’s story may sound pathetic and funny, Afoko has decided to not only chicha the Elephant with his left hand but with both hands. I asked him why he has decided to murder an already dying Elephant, Eiwoo, he told me a hunter does not have pity on a sick animal.

Few days ago, the suspended chairman of the NPP, Mr. Paul Afoko was interviewed by the prestigious pan-African magazine, the AfricaWatch (April, 2016 edition). In fact, the contents of the discussion is worrying and shocking.

People think I am being unfair whenever I refer to the opposition in this country as rapacious, malcontent and horrid who seemed to be possessed with the combined forces of all the angels who fell from heaven! Kai, I have been vindicated oo.
Chai, corruption be what? According to Afoko, when he took over as chairman, the NPP had a miserable GHC89 in its official bank account. I mean eighty-nine Ghana cedis! The mother of all scandals was that there were multiple accounts with the party’s name operated by people who were not NPP elected officials or appointees; hehehehehe, their only qualification is that they are very close to Opana. One of such accounts had a whopping US$48,000 in it. Abakade, this is your government in waiting oo!

Chairman Afoko refers to Opana and his team as Intolerant Militant Wing (IMW) who want to bring pain to the people of Ghana through war; the IMW brought some Serbians into the country to train some party members how to bring chaos into the country and topple this government in an exercise dubbed “Assaulting the Pillars of Power.”

Hear Chairman Afoko: Otiko Djaba, the National Women’s Organiser told me that all Regional Organisers, Youth Organisers and Nassara Coordinators were being trained by some Serbians in a hotel at Achimota Mile 7. I said, what, what’s going on? I don’t know anything about it. My blood started boiling. I asked General Secretary Kwabena Agyepong to join me and Otiko to the hotel.

When we got to the hotel, I saw our people all over the place with two Serbians, a man and a woman, but I was told the Serbians were four and that two had left. I walked in and saw the National Organiser, John Boadu, and I asked him what was going on. He was holding a paper, and I snatched it out of his hand. It was the training contents and I was shocked to my bones at what I was reading. These people were out of their minds. They wanted to win the elections on the streets of Ghana and not at the ballot box.

A stunning disclosure by the May 6, 2016 edition of the Gazette newspaper reveals that the first Occupy Ghana protest and many other demonstrations that followed, were part of the Serbian mercenaries roadmap. Ghanaians are peaceful and do not deserve to be killed in needless and senseless war. People of Ghana make na shine your eyes oo, ayoo.

If there is one person who is motivated to unmake yaanom, it is the beleaguered Chairman Afoko. He seems to be bitter, and fighting his suspension in court and through various means possible. He has vowed to fight with his last drop of blood. Kikikikikiki, Afoko chicha, rough-rough. 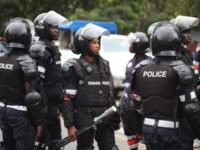