Aduana Stars could be plunged from the Ghana Premier League after a charge to forfeit two league matches they played last season.

The club has been charged for their violation of Articles 34(1)(L) and 39(8)(b) of the Ghana Football Association General Regulations (GFA Regulations).

Aduana Stars have until 5pm on Thursday, July 31, 2014 to respond to the charge.

If they fail, they will be deducted six points and that Aduana will join Amidaus Professionals and Ebusa Dwarfs as the three relegated clubs.

King Faisal, who finished third-bottom, will profit from that and be retained in the Ghana top-flight. 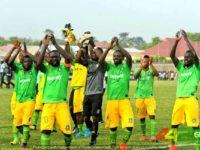 Soccer: Aduana wins 2-1 against AS Vita