The Ashanti Regional Project Manager for the Water and Sanitation for Urban Poor (WSUP), a UK non-profit organisation, Mr Ebenezer Atsuga, has disclosed that more than 40 per cent of houses in Kumasi do not have access to toilet facilities.

This usually compels many residents in Kumasi to queue long hours before getting access to a toilet facility which comes along with inconvenience, time wasting among others.

Speaking to The Mirror in Kumasi, Mr Atsuga said to help mitigate the situation, the WSUP, in collaboration with the Kumasi Metropolitan Assembly, have commenced a five-year compound sanitation strategy to ensure that residents have access to toilet.

He said these at the sidelines of a float to sensitise residents of Kumasi to the initiative which was launched in November last year and is aimed at ensuring that 100,000 people in Kumasi are provided with sanitation facility by the next five years.

Mr Atsuga said the provision of technical support was from the KMA and WSUP, while the HFC bank also provided the needed funds to the prospective landlord or the investor.

Payment for the project, which is usually in instalment, begins as soon as the household or the users begin to use the facility.

“The repayment begins as soon as the people in the house begin to use the facility which is paid monthly in instalments until all payments made and it becomes the property of the landlord or the investor,” he explained.

To bring to the attention of residents of the Kumasi Metropolis, the stakeholders embarked on a float through some principal streets in Kumasi.

The float was used to distribute leaflets and handbills to residents of the metropolis.

The Managing Director at HFC Boafo Micro Finance Ltd, Mr Kofi Agyenim Boateng, explained that the company decided to sponsor the project due to the importance it attached to sanitation and good health in the country.

He said when patronised well, it stands the chance of improving the health conditions of the people, prevent the stress and inconveniences that accompany the lack of toilet facilities.

The managing director said 150 compounds have benefitted from the project nationwide since it commenced late last year and urged many more landlords to subscribe to the initiative to benefit many people.

The Director at the Waste Management Unit of the KMA, Mr Anthony Mensah said the project targeted mainly indigenous settlement in the metropolis (old towns) and areas such as compound houses which used to use bucket latrines. 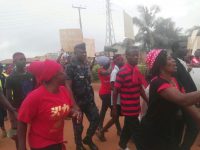